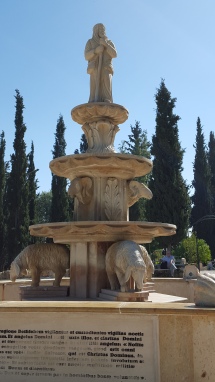 The entrance into the Church of the Nativity 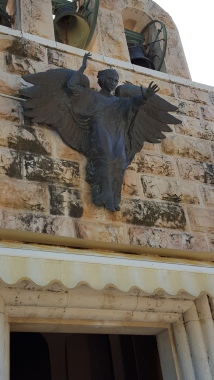 The Church at the Shepherds Fields

We began our day with a visit to a portion of the wall that divides Jerusalem from the West Bank. The Israelis built the wall to protect themselves from extremists, but the Palestinians who are walled in have little ways to support themselves and often act out of desperation. We have learned a lot from our guide Tony (an Israeli Christian whose family came from Italy during the Crusades) about the plight of the dwindling Christian population in Israel and the West Bank. Bethlehem used to be a Christian town, but today less than 25% is Christian; the rest are Muslim (many are extremists now, too … “looks like Afghanistan here now,” we heard.). The population of Israel is about 8% Christian, and the extreme forms of Judaism on one hand and extreme Islam on the other make life very hard for Christians.

We went to a shop which supports 9 families of Palestinian Christians to purchase olive wood products, jewelry, and some other locally produced products. These families rely on the tourist trade to support themselves, and our group was happy to participate.

Mid-morning we arrived at the Shepherds Field, where a garden surrounds a small church, a cave-like area that seems like a stable might have been in Jesus’ time, and a number of small outside chapels overlooking the rocky hills surrounding Bethlehem. In one of these chapels, we celebrated Holy Comunion, before going nearby to a restaurant called The Tent. It’s designed like a big bedoin tent in which are many tables to accomodate groups of tourists. The food was very good, starting with an array of appetizers including many vegetable dishes, hummus, and something a little like hummus but called “garlic sauce” by our waiter. Fabulous on bread and the potatoes that came later … we shared mints afterward and were grateful to return to our hotel (and toothbrushes) briefly after lunch.

After a brisk walk through the Bethlehem souk (market) – trying not to lose anyone in a crowded street of shops, cars and people – we visted Dar El Kalima University (a Lutheran progam for arts education) that works to change the culture of the people of the West Bank. Then, we visited the St. Vincent de Paul Orphanage called La Creche. In Muslim sharia law, a girl or woman who is pregnant out of wedlock is to be killed by her family to preserve the honor of her family. It doesn’t matter if the girl is raped by a family member; the girl is punished while the man is unharmed.  The orphanage takes in abandoned babies and tries to help young women who give at 24 weeks, leaving their children behind. The infants often have birth defects and injuries, cannot be adopted (again by sharia law), and are cared for until age 6 by the Sisters of St. Vincent de Paul until the children can be fostered with families or moved to other orphanages. This was a disturbing visit for our group, but it continued to help us learn more about the complexity of life in this holy and complicated land.

We returned to our hotel for our last night in Bethlehem. Tomorrow…Jerusalem.